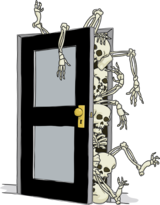 What are the skeletons in your superannuations closet?

Transparency International, a global organisation whose goal is to combat (and end) corruption, have just released their annual ‘Corruption Perceptions Index’ (“CPI”). The index rates and ranks countries on their perceived levels of public sector corruption, and is a valuable tool that helps to hold governments to account.

Research has linked perceived corruption (let alone corruption in itself) to significant economic consequences. Papers published in 2007 and 2008 examined the impacts of perceived corruption, as defined by the CPI. There was a strong correlation found between countries perceived to be less corrupt and higher long-term economic growth, alongside an increase in GDP growth of 1.7% for every unit increase in a country's CPI score.

Data used to compile the scores covers a wide range of corrupt practices such as bribery, diversion of public funds, official’s use of public office for private gain, and laws ensuring that public officials must disclose their finances and potential conflicts of interest. Australia ranked 18th of 180 countries for the 2021 CPI and, though down four points to 73/100 from last year’s rating, was still well above the global average as you might expect.

Compare Australia’s CPI score to its ranking by a 2020 Morningstar report into investment portfolio disclosure, for which Australia ranked bottom of 26 global markets. Australia has repeatedly been ranked worst for disclosures by Morningstar. Introduced after a decade of delays by conservative coalition governments to a Labour law from 2012, Josh Frydenburg MP in a joint notice with Senator Jane Hulme (Minister for Superannuation) announced on 11 November 2021 that new regulations would force funds to disclose information to members on investments by 31 March 2022. Critics have blamed heavy lobbying from the superannuation sector for delays to this regulation and, whilst a step in the right direction, the rules still lack the requirement for a full ‘look through’ to underlying pension assets, meaning that for the most part individuals will still be kept in the dark.

The longstanding opacity of the superannuation system has unnecessarily exposed Australians to investment risk and potential overcharging, and has also provided insufficient information on environmental, social, and governance issues. We believe that Australians have the right to know what their money is invested in and decide what future they are saving toward. That’s why, using ESG data compiled by Market Forces, our mysuper comparison table provides a transparency score for mysuper products, alongside clear information for coal, oil and gas inclusion and net zero commitments.

Sasha Stancliffe Bird
Back to News